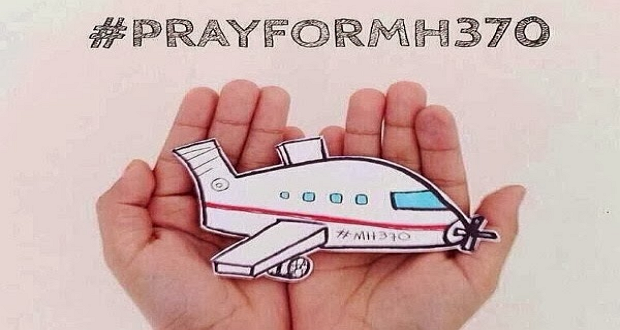 I hope it's not too late to wish all of my Muslim readers and friends here: 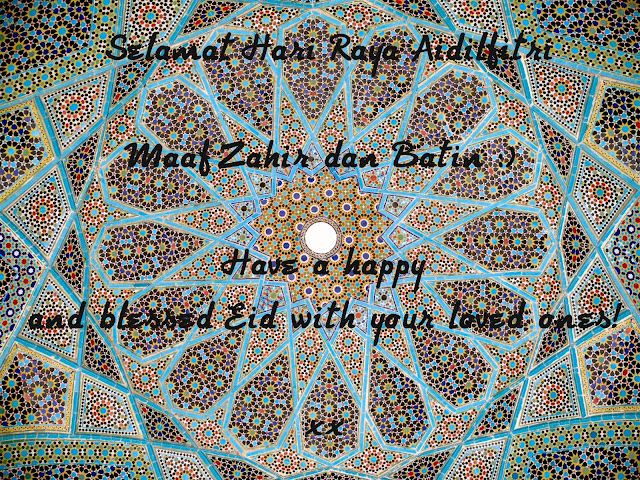 Go easy on the yummy food (well I'm trying to tell that to myself but somehow it hasn't been working!) ;)
Posted by Ms Road Runner at 3:17 PM 0 comments

I got this from a friend that shared with me via Facebook: 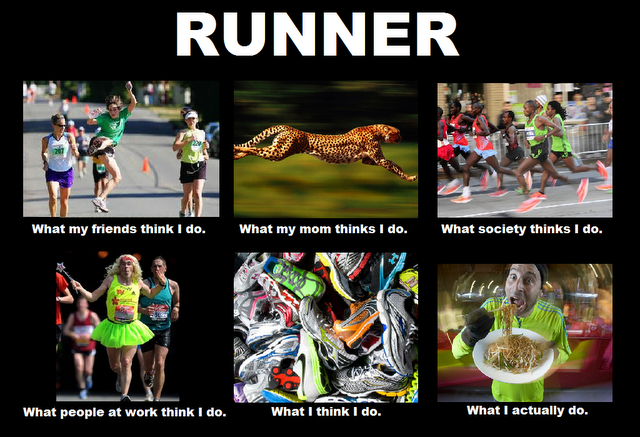 And couldn't agree more this, especially the last picture :P

Oh, the joy of (pre and post) running *wink*

Hope that it's not too late to wish my Muslim friends and readers here a peaceful, spiritual and blessed month :)

May Allah's blessings be with you.

Yesterday, my friends and I ran the Seremban Half Marathon.

It was my first running event here in my home country.... Yes I've become lazy to run at races these days :P

But it was my second time running at this race, and the route was still the same (you can read about my experience back in 2011 here)

But there were definitely more participants this year :)

With zero training for the past 2 weeks, the four of us decided to just run the marathon (Note: You should always train for a run, no matter how short or long the distance is! My legs are in pain as I'm typing this so serve me right :P)

So completed the half marathon in 2 hrs 22 mins and managed to grab one of the limited Royal Selangor pewters.. So, I can rest my legs now for a month ;) 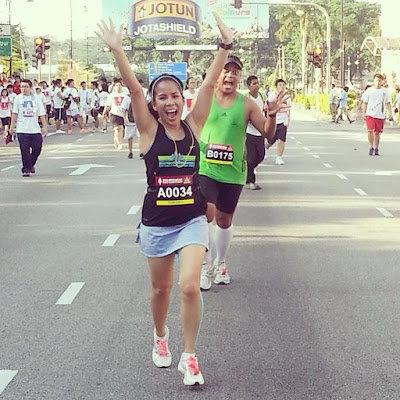 Moments before crossing the finish line with Irwan
Pic taken by Azri, our running friend who was there to support the runners :) 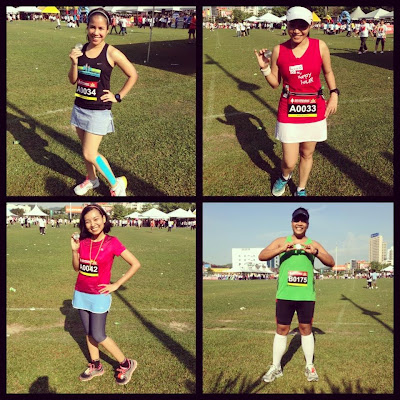 All of us with our 'medals'

And had such a great weekend with my friends too! Lots of yummy food consumed as always *wink*

Anyways, we are in the papers today! :) 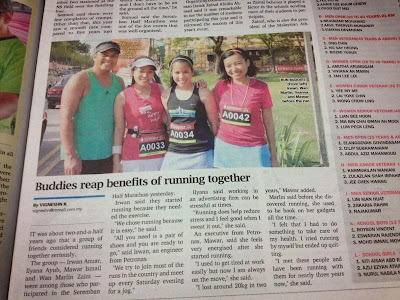 Though the writer did get a lot of facts mixed up in this article... I told the writer that running is my 'me time', not only when I'm stressed out ;)

Hope all of you had an awesome weekend too!
Posted by Ms Road Runner at 6:04 PM 0 comments

It has been almost 2 months since my 9th marathon and I know I've been procrastinating to write this entry *peace*, but life has been pretty hectic since then ;)

Anyways, 6 days before the marathon and a day before I flew to Madrid, I felt a sharp pain on the left side of my left leg and so I decided to check it out at the sport medical centre... I was devastated when the doctor told me that I had a hairline fracture and advised me not to run for at least 6 weeks!!! (It was more painful than a break up ok :P) I was training pretty hard for it and was hoping to get a good time for the marathon so it was really heartbreaking to have injured myself just 6 days before the marathon :(

Contemplated to not run or even switch to 21km category a few days before the marathon. But, of course the stubborn ol' me decided to go ahead and run the marathon ;) I couldn't help myself as I was having a bad week at that time and all I could think of was to run the marathon.

One of the signs at the marathon route

I was so ecstatic this time around too as there were four of us traveling together to Europe and that my bestie of 20 years decided to tag along too!!! :D :D :D

Us in Amsterdam - our last stop after Madrid!

Before arriving in Madrid, I thought that the weather was going to by sunny and perfect on race day itself. But boy I was so so so wrong!!! It was 3 degrees and super windy!!! ANDDDD I didn't even bring my arm sleeves or long sleeved running tops too!!! So clever right? :P

Us freezing and before the madness and swearings began!
Senorita was there too! ;)

Our hotel was just a walking distance from the start/finish line, so we decided to walk earlier to drop our bags at the designated trucks. This is where the nightmare began. The 21km and 10km categories started at the same time as the marathon category, and with over 10,000 runners trying to drop their bags at the same time, you can imagine that the organisers only provided 8 friggin' trucks for this!!! So we had to queue for an hour in the freezing cold weather and just made it in time before the flag off!!! Very bad organisers!!!

So with just my sleeveless tank, I was praying hard that the weather will be better after I started running. But of course that didn't happen :P By the time I was at my 20th kilometer, my nose was runny and that my arms and hands were swollen and numb. Served me right for not bringing those arm sleeves! :P 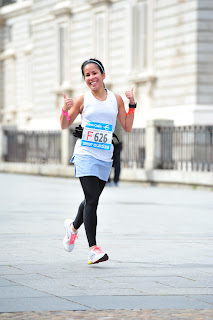 Smiled for the cameras eventhough I couldn't feel my hands already :P

The route was pretty scenic though, as we ran past the famous Santiago Bernabeu Stadium (home of Real Madrid FC), Plaza Mayor, Royal Palace Madrid (breathtakingly beautiful palace!), Casa De Campo and Retiro Park (as I recalled). But it was hilly alright! Like superduper hilly! We knew that it was going to be somewhat hilly before we ran the marathon. But it was worse than we thought! Bukit Aman was nothing compared to the hills that we had to go through at this marathon!!! Just check out the 'claimed' elevation profile vs what Selly's Garmin recorded:

I was doing pretty well with my face until I was at the 25km marker, as I started to feel a sharp pull on my left leg, and from then onward I knew that I had to take it easy and just enjoy the superchilly race as the aim was just to cross the finish line. And of course, they had to throw an even hillier route at our last 8km of the race! I was definitely in for a (hilly) treat!

I made friends with one of the runners and he was doing his maiden marathon! I told him that nobody in their right mind would want to do Madrid as their first marathon :P So, we both tackled the last 8km of the route together and it felt good to have someone as I was feeling pretty demotivated at that time with the pain on my left leg. But we did a lot of walking instead as I just didn't want to push myself and wanted to walk the next day :P Selly aka Senorita caught up with us at the last 3 or 4km of the route and we decided finish the race together. It was also my first time to be walking a lot! There's always a first for every single thing in life right? :P 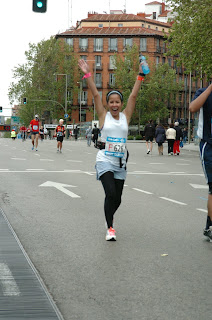 Proof that I was enjoying my walk ;)

As we entered the Retiro Park, we decided to sprint and smiled for the cameras ;) 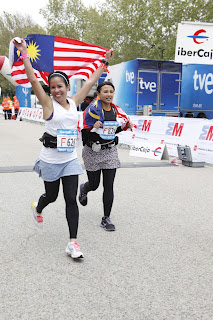 Both Selly and I crossed the finish line together at an official time of 5:09:12! Since we did a lot of walking and we were in pain, it wasn't a bad timing after all :)

Now, as if the baggage drop-off drama wasn't enough, the organisers ran out of the finisher medals for the marathoners and gave 10K medals instead!!! They told us that they'd mail the medal to us instead which thankfully arrived last week! I was tired, hungry and in pain by that time and I was just disappointed as to how they could run out of medals! 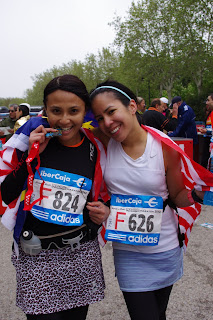 Moments after the race with the 10k medal!

ANDDDDDDD to top it all off, when we both went to the truck to pick up our bags, they couldn't find my friggin' bag! So we stood there for almost 40 mins in the cold (mind you it was 5 degrees at that time and I only covered myself with my flag!!!) and waited for the volunteers to find my bag when it was sitting in front of one of them all the while!!! Disappointed beyond words that all of us didn't even take pictures together after the race and just wanted to rest!!! Another first for us!

So there you go. My first and last time to run in Madrid! Even our local races are organised wayyyyy better than the Madrid one! Thank God the medal was pretty and that my friends were there :) The only plus points I could give to the organisers were the fact that the bands that performed along the route were pretty good (though some of them sang in Spanish :P) and that the support crew on rollerblades that offered sprays and vaseline throughout the route.

But I'm happy to have experienced and challenged myself to run the beautiful and hilly streets of Madrid, even though my leg was paying for it after that ;)

So after resting for 6 weeks, I'm back on my feet and running again now :)
Posted by Ms Road Runner at 5:13 PM 0 comments

OK I know that I need to update a number of posts here anddddd I promise that I will!!!

But, in the meantime, do check out Sukan G at www.facebook.com/sukangirls as we're having a massive clearance sale on all of the items to make way for new pretty things for all of you out there :D

View my complete profile
ALL TEXT AND IMAGES © MS ROAD RUNNER
Ƹ̵̡Ӝ̵̨̄Ʒ FOR ANY Qs OR ANYTHING, WRITE TO ME Here Ƹ̵̡Ӝ̵̨̄Ʒ

Promote your Page too 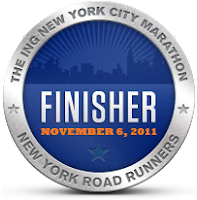